"Well, I woke up Sunday morning with no way to hold my head that didn't hurt...."

No, I wasn't drinking Saturday night--or Sunday morning--but I felt tired, run down, and generally crappy. I woke up, thought about racing, saw it was 3:20 am, and my mind was now too awake to go back to sleep. On the bright side, I had time to I eat a good breakfast.

The drive to Moscow seemed to take forever. I showed up an hour before the first race, registered, and slowly rode the course to wake and warm myself up. There were some interesting changes from last year. It seems everyone with a cyclocross course is making improvements every year. Two additions were a sand trap inside a shed. You had to make a right turn through it. I found it best to hit it at a diagonal and squeeze the turn out just before hitting the tape. And there was a long sand trap that looked intimidating but was easy to pedal through--as long as you pedaled hard. Adding to the difficulty was a huge log that a few hopped or somewhat bumped over followed by a short but steep left turn quickly followed by a sharp right turn through a ditch. I and many others ran through the obstacle and up the incline, which was just as fast as what everyone else was doing. To me it was easier than getting back on the bike and trying to get enough speed for the climb in about 10 feet, especially with a single speed.

My single speed race was okay. I didn't go all out since I wasn't feeling well and wanted to save some energy for later. I did notice that coming out of the turns, all the other single speeders were accelerating faster than me and I'm pretty sure it was because they had a gear ratio that provided for more power. I had to crank to get up to speed. By the last lap--and I got all my laps in--my back was hurting. So that didn't help out my overall condition.

After the race I ate and hydrated but continued to feel bad. The combination of physical exertion and lack of sleep affects me a lot. So just before the men's masters I struck my name from the roster. On the bright side everyone in that race got their picture taken for a change.


Boatloads of pictures are on on the Inland Northwest Cyclocross Series Facebook page.  Here's a few beast mode shots. 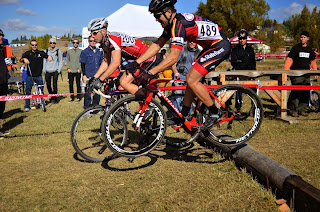 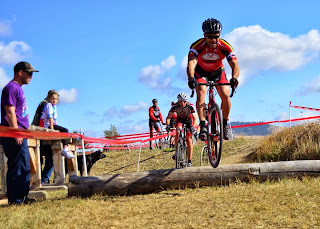 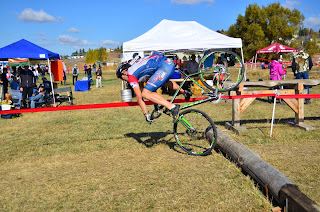 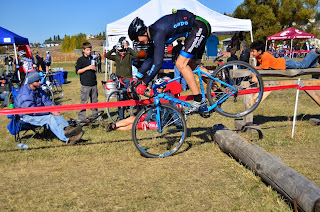 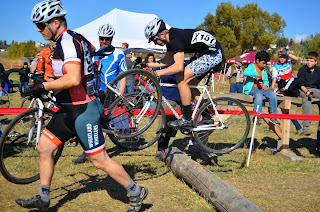 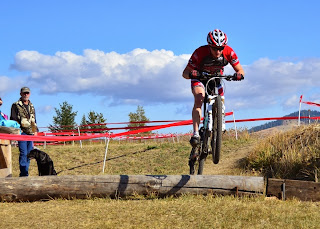 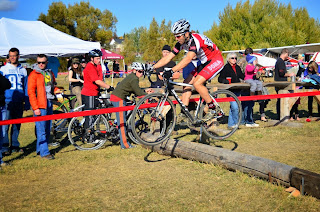 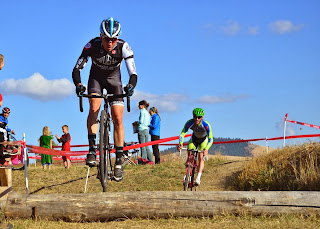 The men's Cat 1/2 was an amazing duel between JT Fountain (L) and Kevin Bradford-Parish (R) in the photo above. I've never seen people go so fast. (Kevin won it.) It was if they were on a smooth road and everyone else on bumpy terrain.
Posted by Hank Greer at 9:24 AM