The cyclocross folks up in Sandpoint really outdid themselves. The course they built is fun, fantastic, and fast with just enough technical areas to keep you on your toes.

Friday evening while getting Top Greer ready for the race, I put on a fresh pair of Michelin Cyclocross Mud 2 tires. I was expecting a mix of wet and dry on the course and I really like the traction the Mud 2 tires provide. I was not disappointed. Mostly. But more on that later.

The start is a long straightaway that leads into a serpentine section where everything slows down for a bit. Then it opens up with an off camber turn, a bridge crossing (recommended over the wetland underneath), and a short climb into another serpentine. After that it's a mad dash to the double pathways through the trees which provide a great passing opportunity and into a short weave followed by more straightaways, the last one containing a bog-like section. Then it's downhill and banking right in another off camber section and up to the run up. The run up is short and steep but there were a couple of really strong riders who amazed some spectators.

After the run up you weave through trees in another boggy area, dip down and up through a ditch, and weave through loose, loamy soil before hitting the barriers. This is followed by four rollers and a steep banked turn, taking you to a log that you bump over, bunny hop, or dismount and run over. After a couple more short banked turns you head for what seems like an infinite death spiral. But with squared off corners. Leaving the death spiral you race for the finish line after you've done your five laps.

I rode the course before my race and tested out my new tires. I tend to be hesitant on the turns and take them too wide. I found these tires increased my confidence and comfort level. I also tried hopping the log a couple of times and felt good about that as well. As you can see from the picture, most people took the far right side, which is the lowest part of the barrier. 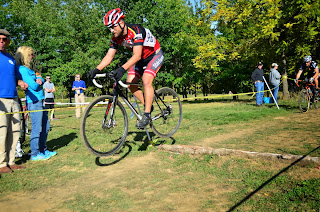 I registered for the men's masters 50+ group. I should probably switch to the men's Cat 4. The masters group is fast. But then just about everybody is faster than me so I just need to deal with it. I got off to a good start and ended up in fun battle with four others riders. I had my tire pressure down to about 30. My front wheel held every time but on some of the sharp turns, especially the squared off death spiral, my back wheel would skip sideways just a bit and then hold. Our little group was taking turns passing each other and jockeying for position. I was the lead of our group a couple of times and that always throws me off because I don't have someone in front of me I can use to judge how fast I'm going. So then I'd get passed because I let my guard down.

On the second lap I was feeling good heading for the log and decided to use it to pass the guy in front of me. While he went to the right side I hammered the pedals and got next to him. I flew over the middle and blew right past him. My friend Joe Anchondo and I then battled back and forth each taking the lead from the other. We were pushing each other hard and I was having a blast. I was not letting my guard down any more.

So halfway through the third lap I was in front of Joe heading for the log again. I cleared it just fine but for some reason I did not have my front wheel straight when I landed on the other side. Like I said, these tires have great traction. The tire held tight. Suddenly my bike is squirreling out from under me in a sharp turn and I'm flying over the handlebars. I landed on the back of my left shoulder and I think my bike then landed on me. Both of my quads felt like they'd been hit with a 2x4. Probably because my legs hit the handlebars on the way over. It's amazing how fast it happened. (Note to my brother John. Okay you were right.) Joe and the others zipped on by and I picked up Top Greer and took inventory of my body.

All the joints moved normally and there was no serious pain so I got back on the bike. Still, it took a lap for me to get my mojo back. I caught up with the back of the 40+ group, giving me a brief mental boost. As you can see from the picture, the tire bent away from the rim so much that it trapped vegetation in between when it snapped back into place. And it didn't go flat. 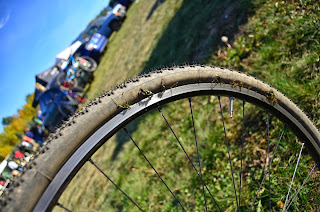 After the race I got my free beer and scarfed down a couple of brauts. I ran into Joe and he was happy to see I was still alive after my hard spill.

Ready to roll at Riverside State Park and Moscow, Idaho next weekend. But not right now. My shoulder and quads are slowing me down today.

Boatloads of photos posted on the Inland Northwest Cyclocross Series Facebook page.
Posted by Hank Greer at 11:35 AM

I think your bunny hopping was vindicated, nevermind the spill.

Pain is commonsense re-entering the body.

Reading threw what you had written was easy I could picture each turn and straight away wishing to race this course once agin.

Bummer you went down Hank, but at least you and Top Greer survived. Oh, and I won't say I told you so. :)