Aside from representing Washinton State's 5th District, Cathy McMorris Rodgers is also the Washington State chair of Mitt Romney's presidential campaign. Our fair congresswoman has been expressing hollow claims that there is no Republican war on women.

“For more than three years, President Obama’s disastrous economic policies have wreaked havoc on women in the workplace with record levels of unemployment and the highest poverty rate in nearly two decades. Now the President has doubled down on his record of failure by proposing even more regulations and more taxes that will make it more difficult for women to find jobs. Mitt Romney supports pay equity for women and, as president, will do what President Obama has not – implement pro-growth economic policies that will allow women and all Americans to finally get back to work.”

I enjoy the disconnect between her saying that Romney supports pay equality for women and while her track record shows she doesn't, at least when it came to the Lilly Ledbetter Fair Pay Act of 2009, legislation addressing a U.S. Supreme Court decision that determined the statute of limitations for presenting an equal-pay lawsuit begins on the date that the employer makes the initial discriminatory wage decision, not at the date of the most recent paycheck, as a lower court had ruled. If the woman didn't realize she was being discriminated against within 180 days then she couldn't sue under Title VII of the Civil Rights Act. This legislation corrected that.

Congresswoman Cathy McMorris Rodgers voted against it. This post wouldn't be complete without a chart from the Bureau of Labor and Statistics totally debunking the assertion that Obama's economic policies are specifically hurting women. 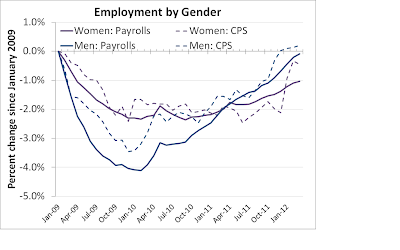 Without considerations of class (and comparable worth), these statistics are mostly meaningless.

Democrats and Republicans have agreed to fight a distracting gender war. Every American is under attack by the very plutocrats both Obama and Romney represent.

Extend your chart back to Nov. 2008, eh. The elites destroyed the economy, profitted from the destruction, and now cynically encourage Americans to divide into competing interest groups and fight over the scraps.

Most people are tuning out. Neither party has an inclusive economic plan. Equal pay laws, in an era of structural unemployment and wage deterioration are like telling women to eat frosting when no one can afford the cake, let alone bread. Hey ladies, now you can join your brothers and husbands in the global race to the bottom! That's a little thing Democrats and Republicans like to call "equality."

The day after the election the globalized Wall Street lords will continue to rule us all, male and female alike.

I boldly envision an America where men and women can compete in complete equality for nonexistant jobs!

An America where anyone can sue for sexually equitable and rapidly declining wages!

Where everyone, except me and my friends, can lose their homes, their livelihoods, and drown in unavoidable debt! Together, as a nation, we can do this!

The Democrats mistepped on this one.

First of all, men lost far more jobs than women in this carefully engineered recession. Can men sue for lost and decreased wages under Lilly Ledbetter? Why are Dems rubbing it in? Obama already had 20 points on women.

Now The Very Mrs. Romney is the poster child for oppressed women. A Democrat who spoke an emotional truth about Her Romneyness is apologizing. Working class moms are rolling their eyes.

This election is pointless.