This morning I fixed my favorite pre-run breakfast of oatmeal and apples with a cup of tea. Then I headed over to Riverside State Park where I was running the 25k at the Spokane River Run. What a beautiful day for a run. I wore my Vibrams like last year, but this year I carried my Nikon DSLR to take photos with along the way. As usual, I did not wear a watch to check my time because I'm out to enjoy the run and have fun. 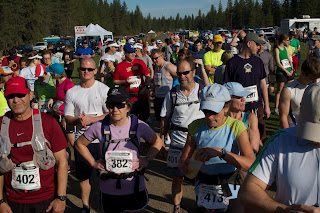 A shot of the 25k runners from the start line. This would pretty much be the only time I would see most of these people. 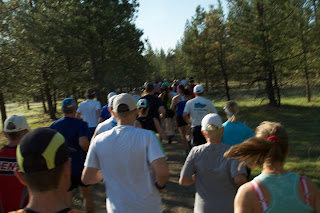 See what I mean? There they go. 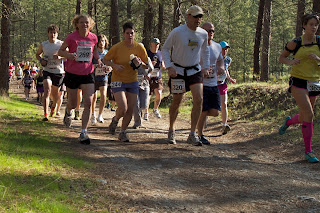 This was some time after the first mile. I walked most of the climbs to conserve energy. And a plus of stopping to take photos is that I get a mini-rest every so often. Since the weather was really nice, but warm for running, I stopped at every food/water station and had a bite and a drink. 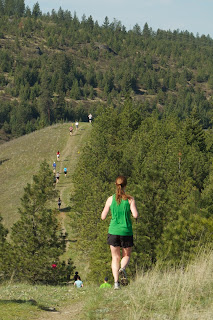 Close to the seven mile marker and it looks like we're miles away from the nearest sign of civilization. After reaching the food/water station at the eight mile mark, I removed my Vibrams to see how far I could make it barefoot. I had vague memories of the course from last year and I thought much of the second half was dirt and/or pine needle covered. My memory was painfully wrong. I barely lasted a mile. There was way too much gravel and rock for my comfort. 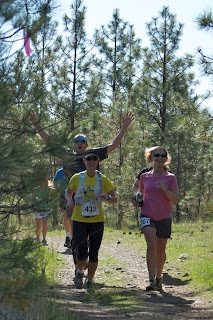 A happy runner celebrates reaching the ten mile mark. Around the eleven mile mark I tripped and in trying to catch myself, strained a hamstring. That slowed me down as I tried to nurse it. And it dropped the reading on the fun meter a touch. 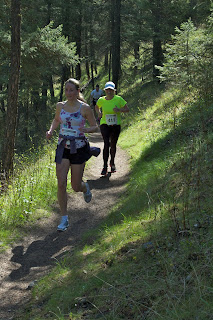 Eleven miles and smiling. (Do they use mile markers for a 25k run because they only need 15 instead of 25?) 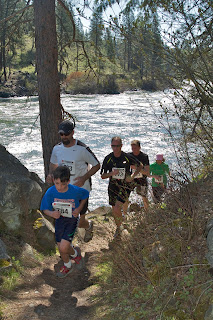 We merged with the 10k runners and I found myself getting swept up with the fast moving group. On a crowded single track trail you either get out of the way or you run faster. There's something about being passed by little kids that shames me into picking up the pace even though I have twelves miles behind me and a sore hamstring. But it seemed to go pretty well since I was running in a crowd instead of by myself. I kept it up until the signs told us it was time to go our separate ways again. The 10k'ers got to take a shortcut and the few of us left doing the 25k straggled alone through the woods to the finish line.

All in all it was a great day for a run. After showering at home I topped it off with a beer and a nap--a much enjoyed perk of being a 55-year-old noncompetitive runner.
Posted by Hank Greer at 4:32 PM

I'd love to see metric distance races like Bloomsday or your typical 10Ks offer K course markers, the mental math is so much more straightforward (especially when running a race). You want to beat an hour in Bloomsday? That'll be 5 minutes per marker. A sub 40 minute 10K? Just under 4 minutes per marker.