Today is "Tax Day." Do you think your taxes are too high, too low, or about right?

I think better questions would be along these lines.

1. Should we restore the income tax rate to the 2001 levels to pay for the wars we've been involved in for over ten years?

2. Are you willing to give up the decreased income tax you've enjoyed for the last nine years to help pay for the wars in Afghanistan and Iraq?

3. Throughout America's history she always raised taxes to pay for wars. With the wars in Iraq and Afghanistan we actually lowered taxes and massively increased our debt. Should we raise taxes to pay that down?

Sometimes we as a nation have to be team players and sacrifice to pay for our nation's actions. Selectively placing the sacrifice on those who are less able to afford it does not engender or promote a team environment.

After her Goldilocks question, she followed up with a graphic from the Republican Study Committee and this:

Do you know how ridiculously confusing and complex our tax code is? Take a look at this. 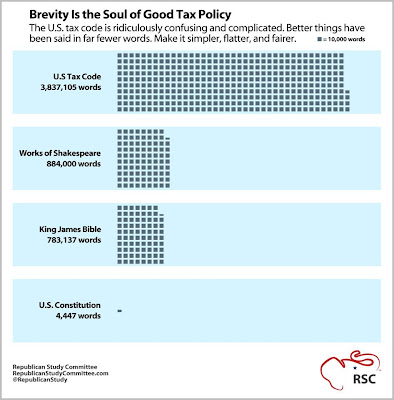 I think the overall concern about taxes is fairness and that is a subject our congresswoman and the rest of her party avoid. Thanks to her pledge to not raise taxes, she has locked herself into a position where nothing else can be discussed. We always hear that everything is on the table, but in truth it's everything except raising taxes.
Posted by Hank Greer at 5:41 AM