The Truth Depends On The Framing

In today's Spokesman Review, Shawn Vestal takes Michael Baumgartner to task for his representation of the truth in response to a Seattle Times article about statements he made about the health care reform legislation. Taking the "debate" to his followers, Baumgartner created a survey which almost can't help but support him. 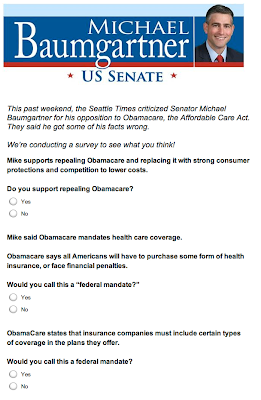 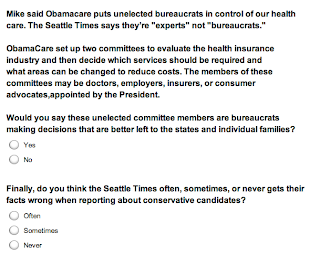 Here's the point I'm trying to make. The key is in how you frame the subject. Instead of asking about the specifics, you label and frame. Baumgartner did the same thing during the sparsely attended town hall meeting where he stated that Social Security is currently unsustainable. In a sense that is true. But instead of talking about how to make it sustainable, he left it like it was road kill and said the answer was to give people more choices. He's doing the same here with health care, treating it like it's an all or nothing choice.

I love the last question. He could just as well ask, "Is the Seattle Times picking on me?"
Posted by Hank Greer at 10:35 AM

Here's another good example of framing. After George Zimmerman murdered Trayvon Martin, President Obama said "If I had a son, he'd look like Trayvon."

Logically, anyone could make that statement. Obama's white mother had a son who "looked like Trayvon"--Obama himself.

Rhetorically, however, Obama's statement helped frame the debate as racial.

Obama himself ordered the killing of at least one teenage American: Anwar al-Malaki's son. This order was of course murder under Federal law, as well as a violation of the kid's Constitutional rights and international law--even if the child was a combatant, which even the administration won't suggest.

So, imagine if Obama said, "If I had a son, he'd look like Abdulrahman."

Logically, that would be true, every bit as possible as a son who looked like Trayvon. Anyone might have a child who looked like the kid Obama murdered. Obama, too. It would depend on the babymama, in the case of biological (nonadoptive) paternity. But, Obama chose not to claim rhetorical paternity of an Arab-American.

Obama offered a different, nonpaternal frame when he murdered a kid, because that kid was a Muslim Arab-American and, of course, because Obama himself was the perp. Instead, he framed as the debate as a (completely bogus) reinterpretation of due process. A legal debate, not a human one.

Democrats should be careful here, since it looks like they're trying to run away from at least two of their three legislative achievements: health reform, the trade deals, and the payroll tax cut.

If these were good policies, why not put your name on them?