Flying Irish Ride To The Run

Yesterday evening was my first flying irish run of the season. It was the FI's 250th run, my 25th run, and in participating in Bike to Work week it was also Ride to the Run. Bikes were leaning all over the place and hundreds of runners filled the Red Lion to capacity. 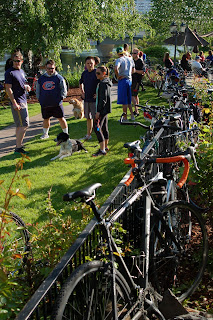 I waited outside on the patio and as people poured out of the building, joined a bunch of runners heading out on the trail. After a bit I stopped to take a couple of photos. Notice anything  in this picture? 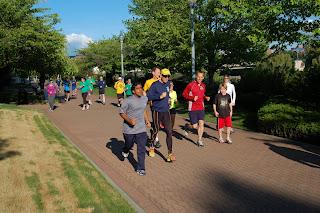 When there are hundreds of runners you have a never ending stream of people going by. There's nobody behind our group. We were going the wrong way.


Who cares because we're still running, right? We pressed on and eventually reconnected with the main group. And we made it back safely so it all worked out.
Posted by Hank Greer at 7:08 AM