Cathy McMorris Rodgers was on Hardball with Chris Matthews last Monday where she tried to defend the House version of the Violence Against Women Act. The Senate version included protections for women in same-sex relationships. The Republican-led House removed that provision and others. Our fair congresswoman had this to say:

MCMORRIS RODGERS: Well– what I — Those are side issues that have been attached to this bill and I think it’s very important to–

MATTHEWS: Well it’s not side issues if you’re getting beat up by your partner. That’s not a side issue, it’s your life.

MCMORRIS RODGERS: That is an issue — there is nothing under federal law that currently recognizes same-sex couples and so if we’re going to have that debate in Congress is should be a separate debate from the reauthorization of the Violence against women act–

MCMORRIS RODGERS: That’s a separate issue from the Violence Against Women Act and we are committed to getting it — it should be debated separately, if we’re going to change our federal law related to same-sex couples. 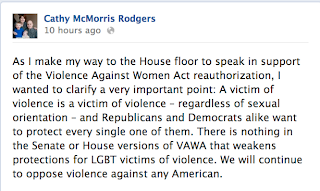 At first glance it may appear our congresswoman had a change of heart, but a careful read reveals how disingenuous she is being. It's true, a victim of violence is a victim regardless of their sexual orientation. But it's the Senate version of the bill that explicitly covers them. The House version she rose up to speak in support of did not.

Last Monday same-sex couples were a side issue for her and then yesterday, without changing the proposed legislation, she said they were covered. It's like magic.
Posted by Hank Greer at 6:19 AM