The temp was just above freezing at my house so I dressed warm for the ride to Bloomsday this morning. After checking in my bike at the Spokane Bike Club corral, I changed into my running clothes and put my bike clothes in the panniers. Wearing a shirt, shorts, and a jacket to keep me warm I decided to leave my Vibrams in the panniers. Why? More on that later.

I got into my assigned area and joined the crowd. This time a couple of people noticing my bare feet started sharing their minimalist shoe experiences with me. One gentleman told me how much the change in form has helped him improve his running, but he says he's too scared to try barefoot. No sweat. It's not like it's required. He and his wife were doing the race, but he rode his bike from Coeur d'Alene while she drove. He has a bet he can finish the run and get home on his bike before she does in the car. The way he took off at the start, I'd say the safe money is on him.

Nearby in my area was a group from Team Blaze, tributes their recently deceased coach, Scott Roy, written on their legs.

Overall, the run went well. The hamstring kept me from opening it up on the downhills but other than that it didn't bother me much. Not too many comments from people this time around. At mile 4 a young man pulled up next to me, held his hand out flat and says, "Hey, all right."

I gave him five and he took off. He was barefoot.

Cool. I am not alone.

At the top of Doomsday Hill a young man catches up to me and says, "Sir, you are an animal."

What a polite person, treating his elders like that.

Just after mile 6 another young man slaps me on the back. "You're an animal!" Well, I guess the verdict is in. 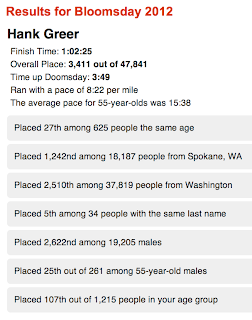 As usual, the section of Broadway from Maple to Monroe was the most uncomfortable part of the race. I think it's chip seal. Basically a lot of gravel tarred into place. I really have to focus on relaxing to get through it and then it's nice to hit smooth surface of Monroe. Going downhill to the finish I had all kinds of people passing me because I couldn't open my stride. Regardless, I didn't do that bad.
After the run I rode over to my mom's house for an ice cream cone and then it was back to the house. The ride home was very pleasant and relaxing. Even if that guy didn't make it home before his wife I'm sure he enjoyed the ride. As for not bringing my Vibrams along on the run, I think the evidence speaks for itself. Placing number 25 out of 261, I'm in the top ten percent of males my age.  I am an animal.

Probably along the lines of an Alpine Marmot or something.
Posted by Hank Greer at 7:31 PM

Good job Hank! Nice to see you at the Expo.

Thanks, Mike. Sorry I didn't recognize you without the beard.