In today's Spokesman Review we have an article about a thwarted Al Qaida plot to use an upgraded underwear bomb to bring down a passenger plane. I'd like to point out something.

The would-be suicide bomber, based in Yemen, had not yet picked a target or bought a plane ticket when the CIA stepped in and seized the bomb, officials said. 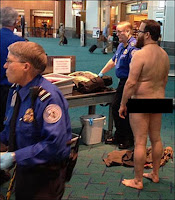 It would appear that intelligence gathering can be an effective tool. Regardless, I look forward to the intrusive precautions that make up the security theater at our airports to continue for a very long time.


I think John Brennan of Portland will someday be known as a man ahead of the times.
Posted by Hank Greer at 6:20 AM

This plot was about as real as the FBI plots that targeted Portland and other US cities.

Also note that the Obama administration failed to mention the crucial detail of the bomber's CIA connection until after pushing the "thwarted bombing" story.

Reminds me of the book catch-22.