An Aid To Terrorists?

The Plane Finder AR application, developed by a British firm for the Apple iPhone and Google's Android, allows users to point their phone at the sky and see the position, height and speed of nearby aircraft.

It also shows the airline, flight number, departure point, destination and even the likely course-the features which could be used to target an aircraft with a surface-to-air missile, or to direct another plane on to a collision course, the 'Daily Mail' reported.

How does it work?

The new application works by intercepting the so-called Automatic Dependent Surveillance-Broadcasts (ADS-B) transmitted by most passenger aircraft to a new satellite tracking system that supplements or, in some countries, replaces radar.

According to the FAA:

ADS-B is a crucial component of the nation's Next-Generation Air Transportation System, and its implementation over the next 20 years will turn the NextGen vision into a reality. After years of research and development, and use by general aviation pilots in Alaska and air transport carriers in the Ohio River Valley, the FAA determined in 2005 that ADS-B is ready to be made operational throughout the national airspace system.

It appears that ADS-B is not using encryption which means anyone can read the signal. So rather than design a safe and secure system we label Plane Finder AR (still on iTunes as of this writing) as a terrorist aid. 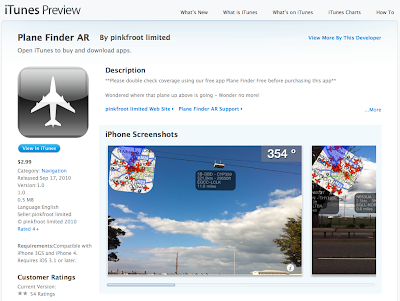 It's like painting a target on your chest and then complaining about how good people can take aim at you.
Posted by Hank Greer at 10:00 PM