Another Accident Involving A Cyclist

Around 2:00 pm this afternoon a cyclist was involved in an accident and seriously injured. The Spokesman Review reported it and you can feel the love in the comments. According to these enlightened minds cyclists need to get off the road, pay for bike lanes, and/or always disregard the rules of the road.

Here's the Street View look of the intersection. The cyclist was going north on Lincoln. It's downhill and it's an arterial going into downtown. The van the cyclist ran into was going east on 4th so it was coming from the cyclist's left. The van had a stop sign. It doesn't look like the cyclist would be at fault on this one but that doesn't stop some people from spouting nonsense about it. 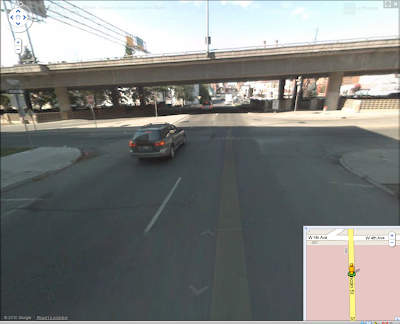 That sucks about the accident.

I've ranted about the S-R's slants before and I don't even want to go there again because it's so pointless, but ". . . the van was struck as it entered the intersection . . .". WTF. How about " . . . the van pulled out in front of the rider . . ."??? Is this just legal bullshit, where the S-R is more concerned about being sued for mis-reporting by the insurance co of the van than the (presumably) un-insured rider? Or just another stupid, knee-jerk, first-on-scene report?

And I can't figure out what possible relevance the last line of the article (about the construction of a bike lane on 4th) has to do with anything.

One of the absolute worst possible uses of my time is reading jerkweed anon comments on the S-R website and yet I got sucked in again today (a separate but seemingly identical set of comments on the article on the 2nd ave bike lane). It put me under a black cloud all afternoon and I have only myself to blame.

I can't read the comments on SR anymore. And certainly not for bike-related columns. Though, in all honesty, I do.

Pat: this will really get your goat. Check out the comments after this article. It's downright depressing to see how a community of smart and respectful readers can disagree...