I fired up the van, turned the seat warmer on and stepped back outside to scrape the ice off the windshield. While passing by Northwood and Farwell schools, little kids wearing jackets were kicking soccer balls across the frosted grass. They probably considered the five-year-olds warm at home to be lucky. A baseball team was warming up on a diamond. Clouds of breath hovered in front of their faces. Do I need to tell you the morning was cold?

I got to Camp Sekani around nine and checked in. The start wasn't until ten. Early arrivals like myself sat in their cars or dressed warm and jockeyed for position between the shadows for what little warmth came from the sun rising through the trees. I walked the course a little bit to check it out. 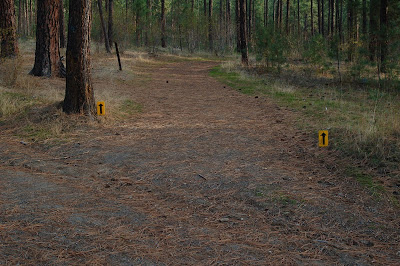 The route looked like it was clearly marked and that proved true during the run. We had a maybe 200 meters of roadway before the route became single track trail. Only about 200 people signed up so getting in front of the crowd would be important to anyone wanting to finish quickly.

Twenty minutes before the start I stripped down to my shirt and shorts and ran out for a quarter mile and back to get a little warmed up. While waiting at the start I had a couple people ask me about my Vibrams. I also met a young man who started running barefoot six months ago and loves it. He wore racing flats today. A young lady also wearing Vibrams told me she was glad to see someone else wearing them for a change. Then someone at the back of the start caught my attention. It was a neighbor of mine with her friend. They've started running together a couple months ago with the goal of doing a marathon next spring. I walked back to say hello and we barely got to talking when the run started.

"See ya later," I said and took off. This was a combined 5k and 10k run with the diversion around the two-mile mark. I ran on the outside of the group so I could pass as many as possible. It's not that I wanted to finish fast. Mostly I didn't want to get stuck behind a group of slower runners who'd made it difficult to pass after the trail narrowed. After about 1/4-mile we had the first hill. I don't know if the climb was exactly a mile long, but it felt that way. It being so early in the run and me being so full of energy, I scampered past a number of people. That first mile was tough. A lot of people were walking as they neared the end of the climb. I was briefly concerned that I went out too fast.

The second mile consisted of rollers. Short and sharp drops and climbs kept me from keeping an even pace so I could catch my breath from the first mile. Serpentine pathways zig-zagged back and forth again preventing an even pace. Mile number three was brutal. A long climb up Tower mountain had me slowing for a short walk on an especially steep section, but after cresting the top the run took a different form. I flew downhill and mile four seemed to take no time. By now I was just behind someone who was keeping the same pace as me. I shadowed him the rest of the way. We blew by the water station at mile 5--why stop when we're almost done?--and cut loose.

The trail opened up to a roadway and I pulled up next to him thinking we could push each other to the finish. His suddenly quickened pace told me he was up for that. We were ripping downhill to the last turn onto the roadway to the finish. We kept pace with each other for almost the entire distance when he fell back just before the finish. We high fived afterwards. It was a good finish. 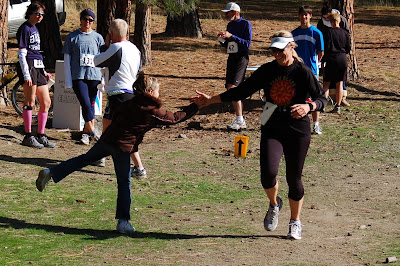 This girl was a volunteer working the race. Her smiling high fives before the finish made it a little brighter for everyone.
I chatted with the guy I raced to the finish with and it turns out he's Steve Warrington. Steve was the cyclist who got hit by a car while competing in the Coeur d'Alene Iron Man last June. It messed up his ankles and this was his first race since then. I could tell he was in his element because he was cheerful and loving every minute of being out there. I asked him about ultras and he's done the Centennial Trail Run. Our paths will probably cross again because we both plan on doing CTR in March.

Coincidentally, Steve and I both took second place in our respective age groups. He (51:26) in the 40-49 group and me (51:23) in the...ahem...more mature group. I was amazed at my time. That's an 8:16 mile pace. It never occurred to me I could or would do that on a trail run. I know the last half of the run was much faster than the first, just like it was for everyone else. Well, maybe not for that guy who did it in 36 minutes and change. Unbelievable!

This was not my first long run with the Bikilas but it was the first long trail run. Uneven terrain requires a lot of flexibility and puts a lot of stress on the foot and ankle. The grippy pads on the soles worked great. I rarely slipped and when I did it was just a little bit. I ended up with a small blister on my right pinky toe from all the lateral movement caused by angled surfaces. Plus, on a fast downhill I nailed a rock really hard with the front part of my left heel. It didn't slow me down but I felt it during the final two miles. I'm feeling it a lot more at home.

This is a great trail run. About the only change I'd make is doing two starts, one for the 5k and one for the 10k, to reduce the crowding at the beginning. And that may become necessary if this run becomes more popular. But with only a couple hundred people participating it seemed more like a neighborhood-level activity than something put on by the City of Spokane. The informality of it all was great. I'll be back next year.
Posted by Hank Greer at 1:02 PM

Congratulations. Its a small world. Steve is in the same tri club as me and the lady in picture getting the high five, Angie, is also in the same club.

Thanks, Al. BTW Steve speaks highly of both you and the team.