Which Ones Deserve Our Attention?

According to the schedule on the Westboro Baptist Church site (Can you appreciate the upside down US flag symbol of distress icon?), Fred Phelps and his demented family members plan to visit Spokane on October 21. 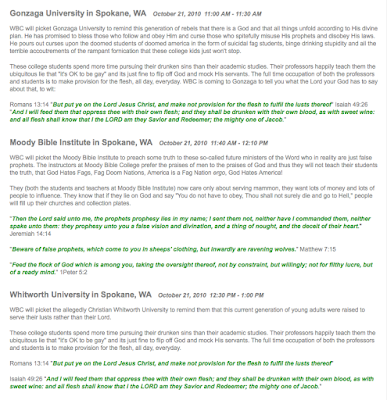 I'll believe it when I see it. The WBC schedules a lot of protests but doesn't follow through on every one.

In the meantime, Facebook counter protests--1048 say they're attending--are developing. It's very encouraging to see such a response to a group of crazies exercising their First Amendment rights.

But what a contrast to the paltry attendance at Congresswoman Cathy McMorris Rodgers' town hall meeting back in August and the combined Chris Marr/John Driscoll town hall back in February. These are people casting votes on legislation that affects each and every one of us.
Posted by Hank Greer at 5:48 AM