To allow John to get back to Tacoma at a decent time we decided to sign up for the first race, Men's Masters all categories ages 40+ and 50+. Since he was in the 40+ group, he got to start ahead of me. The 50+ group started 90 seconds later. Barb, our sister, came out to watch and take photos so all photo credits are hers. 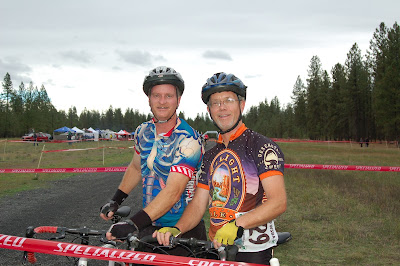 Here we are fresh faced and ready before the race.

We did a couple of warm up laps and scouted the course. The layout was great with some nice level or downhill parts to help you recover from the obstacles and climbs. 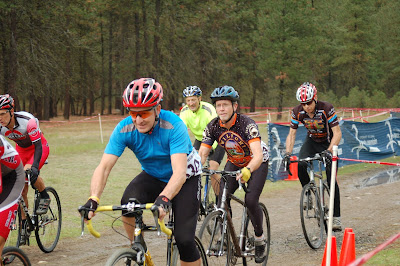 Since this was my first race I wisely started at the back of my group. At first I tried to keep up with everyone as they pulled away. I quickly wised up and backed off. There's no sense killing myself trying to ride someone else's race. It took me about three laps before I found my rhythm. I definitely need practice at getting over the obstacles. I kept bouncing my front tire on them which forced me to struggle to control the bike. I was getting the hang of finding my lines between roots, rocks, puddles, etc., but there was one corner where I kept forgetting about a low branch. I hit my head on the branch on every lap. I guess some things just take longer to learn. 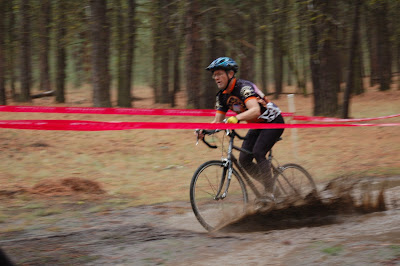 The puddles were the best part. I charged them as much as I could. It's not like I'm going to get any wetter. Besides, it was fun. 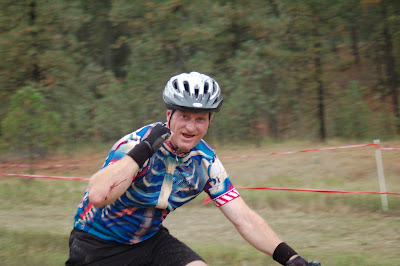 John wiped out on one turn and found time to show off his wound to Barb. 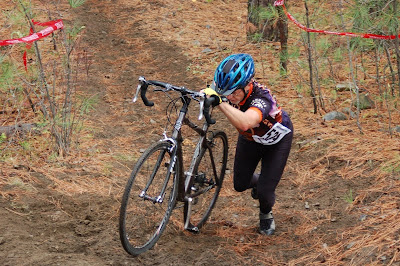 I used the push-the-bike-up-the-hill technique. 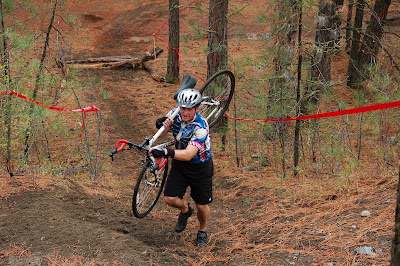 John shouldered his and lugged it up.

I wasn't really clear on the rules but I was told that if you are passed by the race leader then that is your last lap. Or something like that. While I was approaching the last turn before the finish line to complete my fourth lap I heard a voice behind me.

I hammered the pedals and pushed hard so he wouldn't pass me before I completed this lap. I was successful, but I was also tired. At the end of my fifth lap I was told I was done. I felt a combination of relief and disappointment. I had one more lap in me but a part of me was a little thankful I didn't have to do it.

This was hard work but in a fun way. I have no idea how I did overall nor do I care. But I'm looking forward to riding through more puddles and making the biggest splash I can.
Posted by Hank Greer at 2:34 PM