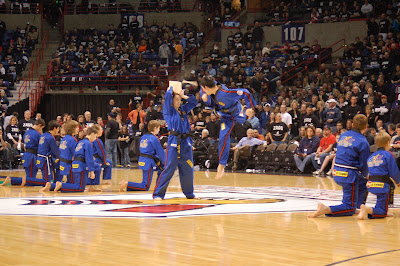 I can't look!
Jung Kim's Taekwondo demonstration team performed during intermission at the Gonzaga/Memphis game in the Arena last night. (An unfortunate game for the Bulldogs where ESPN came all the way to Spokane to watch GU get schooled. Also a shining example of how college sports is such a big business, but that's another topic.) It was the largest crowd the demo team has ever performed for. Master Kim was very nervous but the team came through and put on a good show. I heard ESPN even carried some of it. Whipping the nunchucks around and some of the more exotic kicks get a good rise out of the crowd, especially when a chunk of a board shoots off like a clay pigeon.

Steph has been in Taekwondo for almost 3-1/2 years and on the demo team for over a year. She should earn her black belt in the spring. It's been a great experience for her. Breaking the boards at the first try during her tests is a matter of pride now even though they get thicker as she progresses. Although the boards are designed to break you still have to hit/kick them properly. Parents often get to hold the boards for their child during the test. At one of her earlier tests Steph missed the board and did a side kick into my hand jamming my straightened arm into my shoulder. Holy cow did that hurt! But there's no crying in Taekwondo. So I sucked it up because that's how we roll.
Posted by Hank Greer at 7:11 AM

Yup, ESPN did show some. And that was the best part of the broadcast.