Faster Than I Think

I had originally planned to go on the breakfast ride this morning, but I decided to wait until later in the day. (Yes, when it was warmer.) My road bike has been collecting dust for a couple months now and I figured the roads were clear enough to take it out. I headed out onto Rutter Parkway mistakenly thinking that between church attendance and the Superbowl pre-game pre-shows traffic would be light. Man, it was busy. I was hoping I'd catch some wildlife, but no luck. An uncooperative blue heron stayed on the other side of the trees and there were no moose or deer to be seen. 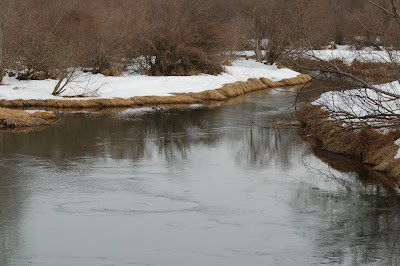 It was a good workout but by the end of the ride my toes were in the cold feet zone. There was no wind today but when you're doing 20mph in 25 degree weather you feel the windchill. Okay, it was more like 16mph except for the downhill parts. (The numbers sound better when you use the octal number system. Octal 20 is equal to decimal 16.)
Posted by Hank Greer at 5:10 PM

Glad you got out. Hope you can get to one of the breakfast rides - they're way fun.

I hope I can make one, too. Sorry I missed it. I've been before when someone didn't show and the wait was about three minutes long so that's about right. :-)