Just To Be On The Safe Side

A mom in Omaha, Nebraska is charged with child endangerment and manufacturing and possession of a destructive device after her 14-year-old son admitted to making dry ice bombs. And get this, the bomb squad was called in to detonate the last one. The bomb squad.

If the young man was shooting off fireworks would his mom be facing those same charges? How does pursuing criminal charges serve better than a good chewing out?

I realize there's an element of danger with any explosive device and there's no guarantee of 100% safety even if you took all precautions, but this is overkill. It's another example of imagining the worst and accepting--now that it's determined there's any chance at all that it could happen--that it's highly likely to happen. There's no rational basis for that. If we thought like that about everything, would anybody fly in a plane or ride in a car? 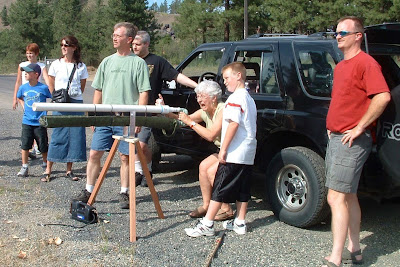 Here's my aunt firing my potato gun--a destructive device--six years ago. Child and elder endangerment on my part because, you know, it could happen.
Posted by Hank Greer at 6:47 AM

Answer: Potato guns are covered by the Second Amendment, but dry ice bombs are not.

you have a potato gun? thats so cool.