Biking And Walking Back On The Chopping Block

A couple of weeks ago I mentioned that the Safe Routes To School Program was being targeted by Rep. Eric Cantor's YouCut web site. Well, it's back in the running again.

For this week's round of YouCut voting, the Economic Recovery Working Group has decided to post the runners up from each of the last five weeks of voting. We've received hundreds of emails from folks asking that we bring back up YouCut proposals from previous weeks that did not win. With these requests in mind, we're giving you another chance. Thanks for voting! 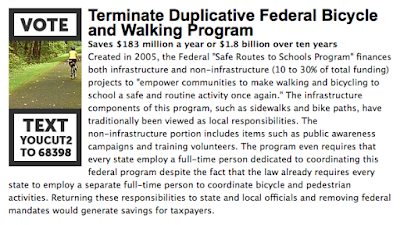 It's a lot easier to kill a program like this than it is to stop a war.
Posted by Hank Greer at 5:49 AM