So I heard back from "eBay International" and my purchase of the Yamaha Grizzly 700 was approved. Whoo-hoo! 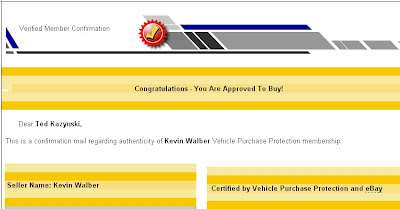 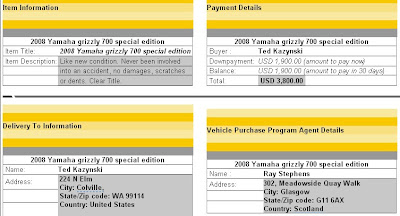 Everything looks pretty official and on the up and up, right? It's certified and insured and guaranteed and too good to pass up.

Whoa, I have to pay using Western Union. That's the same thing my Russian almost love of my life, Dariya, tried to pull. Sigh. And Dariya was so much more beautiful than this Yamaha. Sigh....Dariya...uh--ahem.

Maybe I can work this out another way. So I wrote Kevin....

I was notified that I was approved through eBay International, but something better has come up. My brother is a long haul trucker and I just found out he's making a delivery in El Paso on Monday. This can save us both a lot of time and hassle. You don't have to make any arrangements and I don't have to wait for shipment. Isn't that great? He's willing to inspect the Yamaha and, if it's as good as you say, pay you in cash and haul it back to me.

If you give me your phone number and address, I can pass that along to him and he can make the buy.

But Kevin did not think this was so good.

I just want to close the deal through eBay safe service.

He has a point, you know. Take the safe route. My answer to him.

So you can probably guess that I'm not about to go to Western Union.

I wonder if Kevin knows Dariya.
Posted by Hank Greer at 9:38 PM

Wonder if he'll accept a money order through the mail instead? I can do Western union, or the post office, or even the US treasury dept!
Just make sure you mail it in a watertight envelope… can't guarantee how it will look if it gets wet on the way…