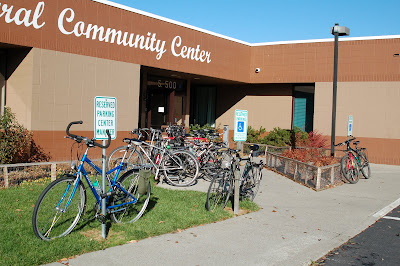 This morning the Bicycle Advisory Board and Cascade Bicycle Club conducted an advocacy workshop at the East Central Community Center. Roughly thirty people attended. There were cycling enthusiasts, various board members, club officers, and even some folks from north Idaho.

I was surprised to learn just how much the Cascade Bicycle Club is involved in the political process in King County and the state legislature. With 11,000 members and a mailing group of 50,000, the club has developed a reach throughout the state but with a heavy emphasis in King County. It's great to have such an advocate for cycling issues, something we're in need of here in Spokane.

Grant Wencel, Spokane City's bike and pedestrian coordinator, briefed the group on the plans and status of the Ben Burr extension and Iron Bridge project. When that is completed, getting to the East Sprague area by bike will be so much easier.

Dan Schaffer gave an update on the paving of Fish Lake Trail. And Bob Lutz briefed everyone on how the sharrows came to be placed on 37th. 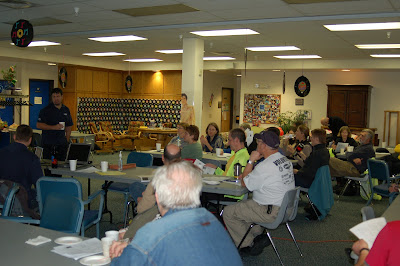 The last part of the workshop covered the steps for addressing a cycling issue, devising and implementing a strategy, and various tactics to work with and persuade people. Each group at a table was given an issue to workshop. It certainly helped our table to have a couple of people with experience in matters like this.

Thanks to Barb Chamberlain for putting this together and for the good folks from the Cascade Bicycle Club for visiting Spokane.

An interesting tidbit came out during some discussions. County Commissioner Bonnie Mager is looking to see if there's any support for a county bicycle advisory board. If you're interested in seeing that, or better yet are interested in serving on such a board, please let her know. I sent my name in.

Almost forgot to mention we took a short ride and viewed where the Ben Burr extension is planned to go in and then went to One World Spokane to eat. It's a different and curious system but the food was delicious!
Posted by Hank Greer at 2:59 PM

Thanks for the update Hank. I had wanted to go to this but had a conflicting thingie that was work-related-ish.

Sadly, attending this made me miss the 350 event at Riverfront Park.