There was a ceremony at the US Federal Building today marking its 100th anniversary. Of the many speakers, there was one particular stand out. 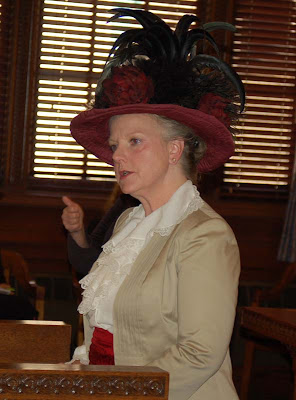 Karen Fairlee, Postmaster of the US Postal Service's Spokane Post Office, dressed in period costume and gave a historical presentation from the perspective of a postmaster opening the facility back in 1909 and finding a ledger purporting to be from a postmaster 100 years hence. She could not vouch for the veracity of the ledger because it said that not only could women vote, but the governor of the state and the representatives to both houses of Congress were women. Imagine that!

She was just as much fun as she was informative. I think people forget how much has changed in 100 years.
Posted by Hank Greer at 8:44 PM