But Where Would You Hang It? 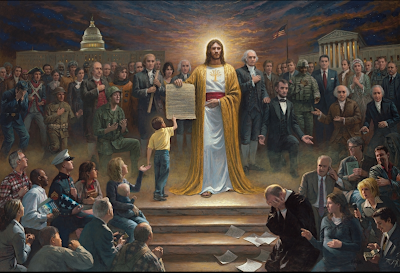 One Nation Under God is an interesting picture (The site may be slow from being overloaded by gawkers). Jesus is holding the U.S. Constitution and he is flanked by historical figures of America's past. In front of him are people representing various vocations. As you mouse over the picture, there's some text either explaining who the person is and/or what they represent. There are religious overtones to just about everything. I know, what a surprise.

Irony moment: Martin Luther King, who railed against the Vietnam war, is memorialized by placing his last name on a black soldier.

Huh? moment: Some of the fifty stars shine brighter than the others. It's up to you to determine which states' stars have dimmed.

If you don't have anything nice to say moment: Business Woman.

Mixed message moment: The immigrant who is shocked by the greatness of Christ and yet it's okay not to be Christian in America.

Whew! moment: The school teacher, presumably also a member of the liberal left controlling our educational system, is valued for teaching our youth.
Posted by Hank Greer at 5:42 AM

Given the lack of diversty, perhaps it's only fitting that Lincoln is imitating Jolson singing "Mammy."