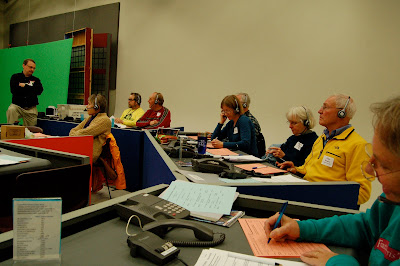 The Spokane Bicycle Club manned the phones for a few hours today at KSPS. It got off to a slow start since it was early in the afternoon. I answered the phone and a woman wanted to cancel the pledge she made earlier. Wow, my first call and I'm already in the hole! She explained she was on a fixed income and she shouldn't be so impulsive. Not a problem. Business picked up a lot as time went on. The last hour went very quickly because I spent the entire time taking pledges from and talking to people from Canada, Idaho, Oregon and Washington. KSPS covers a large area and our Canadian neighbors really appreciate the station. Most of the calls I answered were from there.

I answered pledge calls at KSPS with a group of parents from my kids' school. I got an obscene call. (From the station's perspective, it was most important that we not react visibly on screen. I wish I had a tape of that moment.)