Who knew there was an 83-page paper about flipping off police officers. Digitus Impudicus: The Middle Finger and the Law (PDF). 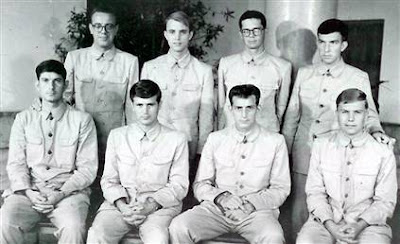 The middle finger is one of the most common insulting gestures in the United States. The finger, which is used to convey a wide range of emotions, is visible on streets and highways, in schools, shopping malls, and sporting events, in courts and execution chambers, in advertisements and on magazine covers, and even on the hallowed floors of legislatures. Despite its ubiquity, however, a number of recent cases demonstrate that those who use the middle finger in public run the risk of being stopped, arrested, prosecuted, fined, and even incarcerated under disorderly conduct or breach-of-peace statutes and ordinances. 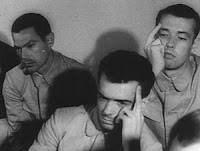 This Article argues that, although most convictions are ultimately overturned on appeal, the pursuit of criminal sanctions for use of the middle finger infringes on First Amendment rights, violates fundamental principles of criminal justice, wastes valuable judicial resources, and defies good sense. Indeed, the U.S. Supreme Court has consistently held that speech may not be prohibited simply because some may find it offensive. Criminal law generally aims to protect persons, property, or the state from serious harm. But use of the middle finger simply does not raise these concerns in most situations, with schools and courts as the exceptions.

A must read for every high school student and parent. 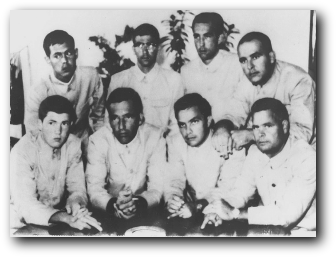 Now you may ask why I included three photos of crew members from the USS Pueblo who appear to be giving you the finger. They're not. They're giving you the Hawaiian Good Luck Sign.
Posted by Hank Greer at 6:55 PM