Why Do Hearing Aids Cost So Much?

Surprisingly, there is very little information to be found on this subject.

Back in 2007, at Kathy's insistence, I finally had my hearing checked and received the word that everyone else already knew. I needed hearing aids which ended up costing me $3,000. It's been three years now and I must admit they have made a huge difference for me. It took a few months before putting them in my ears first thing in the morning became habitual. Getting my brain to relearn which sounds were ambient was a chore.

And who knew water coming from a faucet could be so loud. But after some months, I adjusted and now I definitely notice when I don't have them in. 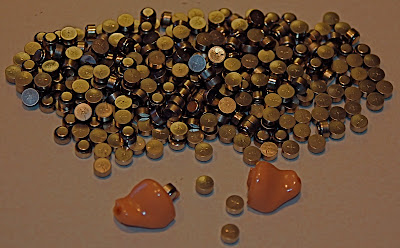 Three years worth of batteries.
So why do they cost so much? From one of the few articles (from 2004) I could find on the topic:

Congress amended the Food, Drug and Cosmetic Act to give the FDA regulatory power over all medical devices, and the FDA followed with the Hearing Aid Rule of 1977. It required consumers to see a physician to rule out a medical problem before getting a hearing aid. It also created an exception: Adults could bypass a doctor if they signed a waiver administered by a state-licensed hearing-aid dispenser. By signing, customers would acknowledge that they understood the dangers of skipping a full medical evaluation.

Today, two types of licensed specialists are the main vendors of hearing aids. State-licensed hearing-aid specialists need only a high-school education but have to pass tests proving their competence to administer hearing exams, fit devices and recognize underlying physical problems. Audiologists must have at least a master's degree, though they generally aren't medical doctors. After the FDA rule went into effect, audiologists changed their professional code of ethics and jumped into the business of selling hearing aids.

Under standards set by professional bodies, the specialists require a battery of tests and fitting sessions, driving up the cost. That results in the $2,200 average cost for hearing aids, a figure cited in an industry study sponsored by Knowles Electronics, an Illinois components maker.

I had my test done separately and it was covered by my insurance. The fitting sessions consisted of making molds of my ear canals and then making sure the hearing aids made from the molds fit properly. My hearing aid provider gave me the same answer of testing and fitting when I asked about the cost. When I remarked that a laptop computer has far more circuitry, capabilities, and power than a hearing aid and costs far less, he answered that chips are made for computers in far greater bulk than for hearing aids. I can't speak to that but it still didn't make me feel any better.

And then he told me that mine were actually cheaper than they could have been. The reason is that my digital aids have twelve bands that can adjust specific frequency ranges. However, my twelve bands were combined to make four. In other words, the capabilities of my hearing aids were purposely reduced to match what I needed. The cost difference is in how the software controls the hardware, not a difference in the hardware. That's hardly a comforting explanation, but that's all I've got.

What a coincidence, this very subject came up on Slashdot.
Posted by Hank Greer at 9:23 AM

I have had tinnitus really bad for the past 3 or 4 years. I think it might be from being in the B-52 for thousands of hours. Where I sat, you could scream at the guy sitting next to you and he couldn't hear you. I wore earplugs and a helmet. Nowadays at work, audible alarms and other noises don't help.

Whenever I get my hearing checked, they tell me that I can't hear any high frequency stuff. I tell them it's because I can't hear it over the really loud ringing. I can hear the continual loud ringing just fine.

I am glad you have some relief.

This continual ringing can really be a drag. It's worse when I am tired it seems.

My gut reaction was that I thought hearing aids would be covered by insurance, but it sounds like that's not the case.

I have been writing about hearing aids for over 3 years and this post does an amazing job of summarizing the points I make the most is a great way. One, it is often such a relief for the users and the FAMILY when the person in need of a hearing aid finally gives in. It is so hard to see the grass grow (notice their hearing has deteriorated) and also people do not want to admit they have the problem.
Two, it is an absolute shame that insurance does not cover these very expensive hearing aids. This is horrible!
Thank you very much for writing this.

Thank you for the compliment.