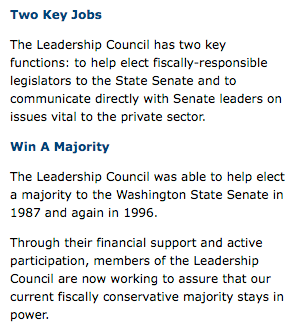 I received a message from the Washington State Leadership Council, an organization you can only join by invitation.

The Leadership Council has two key functions: To help elect fiscally-responsible Republicans to the State Senate and to communicate directly with Senate leaders on issues vital to the private sector.

They called with the "disturbing news" that Senator Chris Marr supported the Health Care Reform legislation. I'm to call his office and complain. I expressed my thanks in an email instead.

I wonder who the council is referring to as "our current fiscally conservative majority"?
Posted by Hank Greer at 7:01 PM