The big news back in Dec 2008 was that she was appointed chair of the Republican Committee on Earmark Reform.

After creating this committee, Republican House Minority Leader John Boehner was not pleased that the Democratic House leadership's decided not to participate.

“I’m also disappointed House Democratic leaders declined to appoint members to the Select Committee on Earmark Reform established by House Republicans, which will begin its work shortly – sadly, without the participation of any members of the majority party."

The committee was supposed to release a report in Feb 2009. There is still no report today nor have they met once since February 2009. That doesn't mean they didn't meet before nor does it mean they did. But still, don't let that make you think Cathy McMorris Rodgers is not serious about earmark reform.

That report was to be delivered “no later than Feb. 16, 2009,” but it still hasn’t come. While a Republican aide said earlier this month that the report is a “work in progress,” committee members acknowledge that they haven’t met once since their February deadline came and went.

Imagine, if you will, what they would have accomplished if both parties participated and not attended the meetings not held. Could they possibly have done more than has been done already?

Committee Chairwoman Cathy McMorris Rodgers (R-Wash.) has requested roughly $129 million in earmarks so far this year. Her staff defended her panel’s work, saying it has “inspired” a GOP website that lists all members’ earmark requests and also inspired “the Republican transparency initiative” that is being pushed now on Capitol Hill.

But McMorris Rodgers’ staff and committee could not identify a single reform recommended by the group. Nor could earmark critic Rep. Jeb Hensarling (R-Texas), another member of the committee.

In 2008, an election year, she voluntarily refrained from requesting earmarks for the year 2009. As you can see from the above quoted article she resumed requesting earmarks, but that doesn't mean she isn't serious about earmark reform.

Thirteen months after the report that was never released by the committee she chaired that never held meetings that she never presided over, the House Appropriations Committee announced yesterday that it will no longer approve earmarks for for-profit companies.

For-profit entities, such as large defense contractors, routinely collect millions in government dollars earmarked by members of Congress in the appropriations process — while their executives donate heavily to lawmakers' campaign accounts.

The ban is intended to be a "long-term proposition," according to a committee news release.

The pressure is now on House Republicans, led by Minority Leader John Boehner of Ohio, who are considering a more sweeping ban, seeking to regain the mantle of fiscal responsibility and capitalize on Democratic ethics missteps.

“We’re going to have to make a decision,” Boehner told his fellow GOP lawmakers at a meeting Wednesday, according to an aide present. “Are we really willing to put it all on the line to win this thing?”

Republican House members have made a decision. Mr Boehner released a statement, also signed by Cathy McMorris Rodgers. After all, she has been serious about earmark reform for quite some time. And the end of the statement is telling. 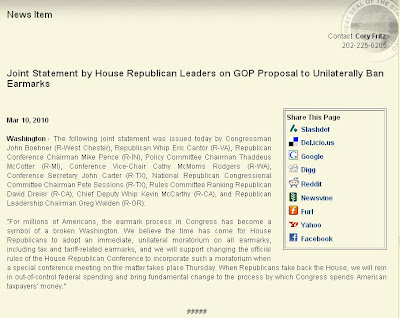 When Republicans take back the House, we will rein in out-of-control federal spending and bring fundamental change to the process by which Congress spends American taxpayers’ money.”

And there you have it. Earmark reform is becoming an issue in an election year which explains why Cathy McMorris Rodgers is so serious about it--again.
Posted by Hank Greer at 6:04 PM