Gonna Tell You A Story...

...that you won't believe.
But I fell in love last Friday evening...

Jim Croce's Roller Derby Queen played in mind as Kathy and I sat down with some friends to watch the Lilac City All Stars go up against the Atomic City Roller Girls at Pattison's last night. I haven't watched roller derby since I was a kid in Abilene, Texas, and a new thing called cable brought the Bay City Bombers into our house in living black and white. 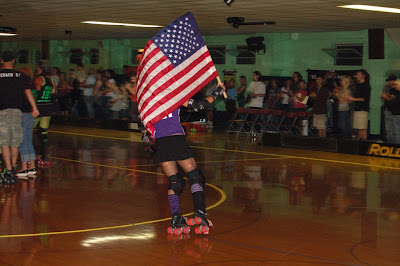 Patriotic fervor abounded as Misato Herdemise circled the rink with the flag while Anya C. Stars sang the national anthem. Old Glory wasn't the only red, white and blue present. Pabst Blue Ribbon is a sponsor. Unfortunately there was no beer to be had. After all, this is a family friendly event. I suppose the deputy sheriff at the front door was there to make sure. 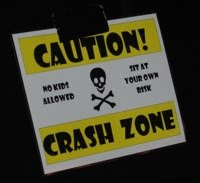 We had corner seats and were encouraged to scoot right up to the barrier. Yes, the barrier with the warning sign. Before the action started MC Serious Love warned us to "Watch out for your little ones." Instinctively, I crossed my legs and turned a little to the side. Then I realized she was talking about the children. 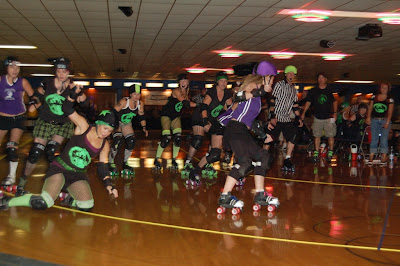 There was no shortage of entertainment as the women skated around on a tight oval. The jammers would take off after the pack, get by if they could, and then catch the pack again to score points by passing their opponents. The occasional cheap shot would send one skater down and the other to the penalty box. 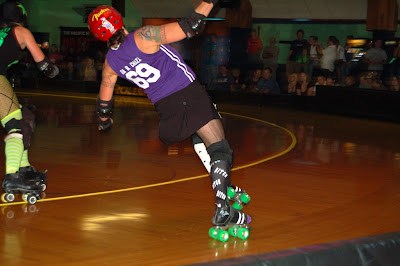 Lilac City's Ida B Choazz is about to go down. Funny, I didn't notice the sticker on the helmet until I now. 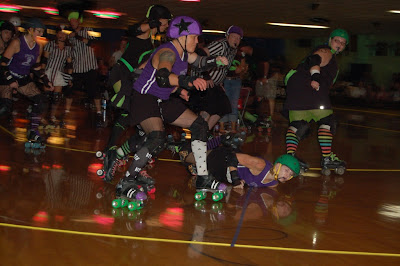 You gotta hand it to these ladies. Even with knee and elbow pads, helmets and wrist protectors, going down on a wooden floor is no picnic. Regardless, Kathy is all pumped to play. Yeah, like that's gonna happen. It's amazing how those 35-year-old roller skating memories don't really seem to be that old. 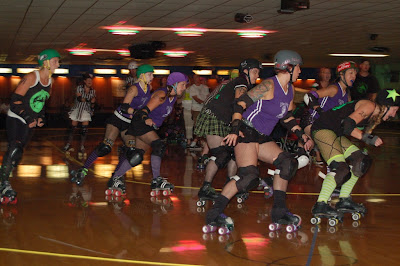 The night that I fell in love with a roller derby queen
Round and round, oh round and round
The meanest hunk o woman
That anybody ever seen
Down in the arena

And if you ever go, be sure to watch out for your little ones.
Posted by Hank Greer at 6:36 AM

Helga Van Beat 'er Down. The name alone scares the hell out of me. I don't care if they were talking about the kids, I think you were right to protect your little one.

That sounds like a fun, interesting evening. And I am with you on protecting the little ones.