My Spider Senses Are Tingling

One summer day last year I happened to notice a man acting somewhat strangely near Main and Wall during the lunch hour. I say strangely because he was apparently dancing to music playing in his earphones but he was dressed to be noticeable and yet also blend in. But to me he looked out of place. So much so that I thought he had "cop" written all over him. Either that evening or the next day I learned about a bike sting the Spokane Police Department was doing near that location. They put an unsecured bike out as bait and arrested anyone who tried to walk off with it. 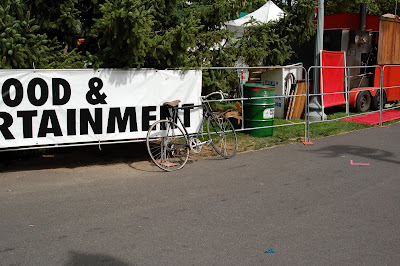 Today I noticed this bike leaning against the temporary fence at Riverfront Park on the edge of Pig Out in the Park. It was near the intersection of Spokane Falls Blvd and Wall. 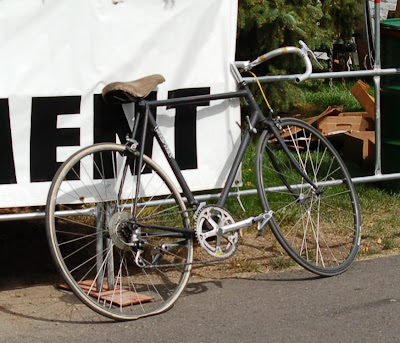 Some things about the bike struck me as odd. First of all, I almost never see an unsecured bike at the park without the owner really close by. The rear tire is flat. There's no rear brake cable. The frame has been stripped or painted over and there's a "Boosters" sticker on the seat tube. It's a Miyata frame and I assume that with the appropriate maintenance it could be a good bike. But right now it's a piece of crap and I thought, "Something's not right." This doesn't fit any patterns in my brain.

Then I went to cross the street and saw a man on the other side leaning against the light pole. He was dressed in baggy pants and a sleeveless shirt and he was just hanging around as if he had no purpose being there and yet still did. I've never seen him before--except--he reminded me of that dancing fellow I saw last year.

So I'm guessing the cops are out there enforcing the law in that one spot. But I'm not going to try walking off with the bike to find out. Of course, I've been wrong so many times before.

Hmm, it was still there when I left work.
Posted by Hank Greer at 6:22 PM

As soon as I saw that photo I thought, "You'd think they'd at least try using a bike that someone would actually give a darn about stealing"

All they're going to attract with that thing is people who think it has been abandoned and want to take it home and fix it up.

I like the idea behind a bike sting, really like it, but they're not going to be targeting the right people if they aren't putting something out with any sort of resale value.

I wonder how they choose the bait bike. My guess is that most opportunistic thieves that would steal a bike on a whim don't know much about bikes... so having a flashy suspension bike, even if it was walmart crap, would probably trap more thieves than a half-built UJB from the 80's.