See You At The Pole

This is the 20th year of See You At The Pole, an event where students meet at the flagpole of their school and pray. You can find a little more background here. Each year has a different theme. Here is this year's theme from the SYATP web site:

A young man named Josiah began one of the greatest revivals and awakenings in the Old Testament. Josiah had become king of Israel at the age of 8. Scripture tells us that at the age of 16, he began to pursue God passionately. Like his forefather, David, he began to show signs of godliness early on and gained the respect of the people. 2 Kings 22:2 states, “He did what was right in the eyes of the Lord and walked in all the ways of his father, David, not turning aside to the right or to the left.”

This resulted in radical obedience — getting rid of everything that did not honor God and challenging everyone around him to do likewise. These actions resulted in a mighty move of God in his day — actually, one of the greatest ever!
...
How about you? Do you desire to see a mighty move of God on your campus? Are you pursuing God passionately? Are you serious about radical obedience? Are you determined to get rid of anything and everything that dishonors God and ready to challenge your friends to do the same? (Emphasis in the original)

Pursue God passionately, radical obedience and getting rid of anything that dishonors God. I can't relate much with pursuing God passionately. I've met and known people who do or claim to. I usually find--in general terms--that a higher level of passion equates to a lower level of critical thinking especially when facts conflict with religious teachings. I've known well-educated people who believe the Earth is only five, six or ten thousand years old. And there are those who don't believe in evolution which makes as much sense as not believing in gravity, as if science is something to be believed in.

Radical obedience is a particularly disturbing part of the theme. I notice an interesting choice of words. First, in relating the story of Josiah, they use the words "getting rid of everything that did not honor God." And then they say "...get rid of anything and everything that dishonors God." This sounds like an extension of the "if you are not with us, you are against us" binary view. If something doesn't honor God then it must dishonor God which is a pretty radical view to take especially when you apply it to people. The question is, in this radical obedience how does one determine if something or anything dishonors--or does not honor--God? Well, the Bible does contain a myriad of rules. Let's have a look at some of them.

Leviticus 18:22 - You shall not lie with a male as with a woman. It is an abomination.

Leviticus 20:13 - If there is a man who lies with a male as those who lie with a woman, both of them have committed a detestable act; they shall surely be put to death. Their bloodguiltiness is upon them.

We hear these all the time, especially with the increasing emphasis of equal rights for same-sex partners among the states. As a society we don't put gay people to death. But some of us tend to use their "sin" as a justification or distraction when a gay person is killed for being "that way". Regardless, the Bible tells us that homosexuality is wrong. But that is not the only rule we need to be radically obedient to.

Nowadays we are pretty forgiving of adulterers. And we certainly don't put them to death. But I'm sure some of the spouses being cheated on wouldn't mind bringing that one back.

Leviticus 11:10 - But all in the seas or in the rivers that do not have fins and scales, all that move in the water or any living thing which is in the water, they are an abomination to you.

Radical obedience would presumably put Red Lobster out of business, affect the menus on a multitude of restaurants and destroy the livelihood of the lobster, crab, and shrimp boaters. And worst of all, there'd be no more Deadliest Catch programs.

Deuteronomy 13:6-10 - If your brother, your mother's son, or your son or daughter, or the wife you cherish, or your friend who is as your own soul, entice you secretly, saying, 'Let us go and serve other gods' (whom neither you nor your fathers have known, of the gods of the peoples who are around you, near you or far from you, from one end of the earth to the other end), you shall not yield to him or listen to him; and your eye shall not pity him, nor shall you spare or conceal him. But you shall surely kill him; your hand shall be first against him to put him to death, and afterwards the hand of all the people. So you shall stone him to death because he has sought to seduce you from the LORD your God who brought you out from the land of Egypt, out of the house of slavery.

Killing a child or sibling because they switched to another religion is not a common practice in our country and we generally frown upon it in other cultures. Radical obedience would presumably set that straight.

In past See You At The Pole days I have seen groups of students circled around the flag pole at different schools in Spokane. Going past one this morning, I stopped to observe for a while because I was curious as to what they'd be praying for. Surprisingly, there were two adults, a man and a woman, present. I have no idea who they were nor do I know the four young people who were present. But I was a little surprised because I was under the impression these are student-led events and not intended for adults because the students were supposed to be reaching out to fellow students. Regardless, while I may have been a curiosity, nobody really paid me any attention other than exchanging "Good morning" with the man. 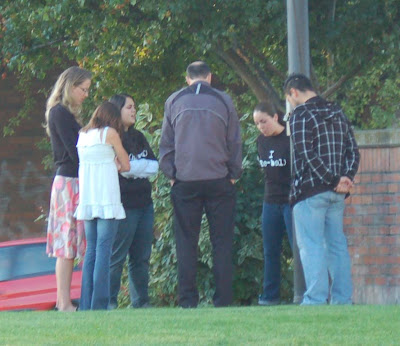 Three of the young people were wearing black t-shirts with "I (re-bel)" on the front. I don't know what, if anything, was on the back--the young man I was near had a shirt on over his--so the significance of the phrase in this context is lost on me. These three were the most fervent as expressed by their nonstop side-to-side swaying, continuous "Thank you, Father" and "Thank you, Jesus" exhaltations, lips moving in presumably silent or whispered prayer, and the occasional upraised hands and arms. The others stood quietly with heads bowed. However, there was a typical teen moment when one of the swaying girls took a moment to check her cell phone all without interrupting her prayer.

The prayers were hard to hear because of a lawn mower on the school grounds and nearby passing traffic. The ones I caught were for poor people, our country, our leaders, and the hungry. One person would pray out loud for a while and when they stopped another would pick up. The woman prayed that all the students and teachers in the school would accept God and change their lives accordingly. Overall, it seemed--whether purposely or not--the prayers dealt mostly with the pursuit of God. Nothing was said about radical obedience and removal of all that dishonors God. Three other young people joined the group one at a time during my ten-minute stay. Given that this school has about 1600 students these seven have their work cut out for them if they're reaching out to the others, especially if the other students are using the critical thinking skills they're supposed to be learning.
Posted by Hank Greer at 6:07 PM

but what about the NEW Testament??

What do you mean?

Believe Jesus said that the greatest commandment of the new covenant was to love God with your whole mind and soul, and to love your neighbor as yourself--Old Testament rules were superseded (sp?) is how I've been thinking. I could be over-simplifying (something I've been cultivating for much of my life.)

Posting the Old Testament rules makes me think of the book I am reading "The Year of Living Biblically" by A.J. Jacobs. He tries to live the 600-odd rules in the bible as literally as possible for a year. It is very funny, since he was never a religious person prior to the experiment, but also very thought provoking.

I noticed in Leviticus it charges you to treat your fellow countryman the same as you would an alien if he is down on his luck. Which implies that "aliens" should receive the highest level of our kindness and generosity. Kind of a Catch-22 for all those folks screaming about illegal immigration or giving health care to the poor.

That's the beauty--and the main issue I have--with being able to pick and choose from a religious text that contains so much guidance. We can pick the parts we agree with, give them more importance, and rationalize the rest away. I think people can still be good without a religious text of any kind as their standard.