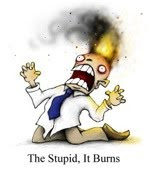 From an article (registration required) in today's Spokesman Review about a rally held by the Tea Party yesterday here in Spokane.

Too many people are uninformed about some of the nation’s big issues, such as health care reform or cap and trade, said Darin Stevens, a local businessman who arrived at the microphone wearing an Obama mask.

“Get involved and get informed about what’s going on,” said Stevens, who urged the crowd to vote against Sen. Maria Cantwell in 2010. The crowd cheered, not realizing, apparently, that Cantwell isn’t up for re-election until 2012.
Posted by Hank Greer at 6:21 AM

Hmmmm....Darin Stevens....that name is so familiar. Oh, I remember now! He used to be married to Samantha, the Bewitched Witch! (or was it "My Favorite Martian?" No, no--that would be just plain WRONG)