At Least My Age Is Prime

Remember when you were a child and your parents talked about an historical event they lived through but for you it sounded like ancient history? You couldn't relate to it other than what you'd read or heard about and it just seemed so far in the past.

As a child I remember hearing about the Korean War from a neighbor who served in the Army there. A number of soldiers were in formation when an officer asked for volunteers to be ambulance drivers. He figured that should be a safe job and stepped forward only to learn that the Army doesn't necessarily work in ways you might expect. He drove an ambulance all right, but it was on the front lines. His Purple Heart informed me had been wounded in action but he never told me the particulars of the events that led to that. Maybe he thought a 15-year-old didn't need to hear about that. But here he was telling me about something that happened before I was born and while I was interested, I also remember thinking he was soooooo old.

Well, what goes around comes around. With the power of Google Maps at my fingertips, I take the opportunity now and then to look at places I've been or lived. For example, there a tiny, corner-lot house in Topeka that brings back a rush of memories for me. I coasted down that driveway after my dad gave me a push and he watched as I rode a bike for the first time and in a panic ran into the back of a neighbor's VW van.

But I digress. While doing a little research about Hellenikon AB, Greece, a base I transferred to in the summer of 1977, I learned it was closed in 1990. I was taking a look at the area using Google maps but I was having difficulty finding it. The base was connected to the Athens airport near Glyfada but the airport was no longer on the map. Digging a little deeper I found that the airport was closed after a new one was opened and the former base, along with much of the adjacent area, was the location of several venues for 2004 Olympics. I mentioned this bit of trivia during dinner last night and Josh, in a convincing act of being impressed, said, "Whoa, you were at the Olympics."

"Yep," I said, "Twenty-seven years before they happened."

"Um, 1977," I informed my son whose impaired subtraction skills apparently don't affect his Calculus grade. "Of course, all that sounds like ancient history to you guys, huh?"

Not realizing I was making matters worse, I piped up with, "Heck, I remember the Mercury and and Gemini launches."

Steph shook her head and sadly informed me, "You are soooo old."

So that's where I am on the day I reach 53 years of age...soooooo old...but damned if I feel like it! 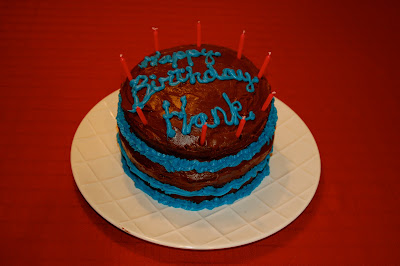 A four-layer cake courtesy of Kathy and Steph.
Posted by Hank Greer at 6:03 PM

Happy Happy Birthday to you, Hank!

Happy birthday to you Hank as you do hit a prime number with your age.

I remember all that stuff, and almost all the USAF bases I was stationed at are closed as well.

Happy Birthday Hank! If I'm in half as good a shape as you are when I hit 53 I will consider it a success.