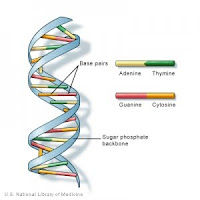 Last night the kids and I watched Nova's Evolution: What Darwin Never Knew. While I could do without the drama, repeated DNA graphics, and weak attempts at suspense building, I did find it fascinating when it finally got to the meat of the program. (Sloppy editing moment: The narrator said, "From leopard" while the video clearly showed a cheetah. Oops!)

The first half hour or so was pretty basic stuff and a bit boring for me, but I suppose the program was geared to a lowest common denominator. The hour after that was the most interesting and I learned a little more about control genes and their role in how life forms develop. Pretty cool stuff.

The next forty years or so of genetic science should be very exciting.
Posted by Hank Greer at 6:23 PM